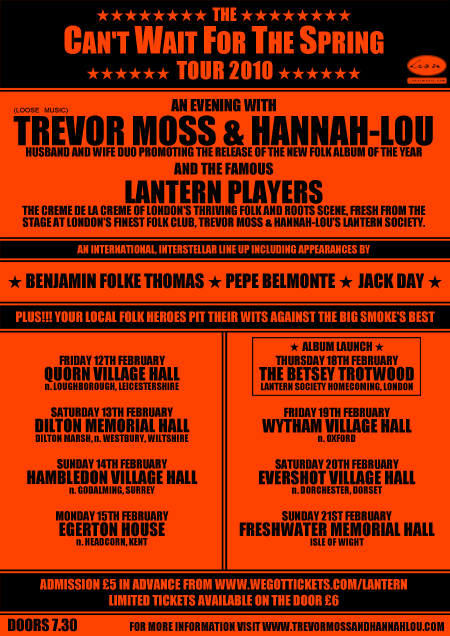 An evening with Trevor Moss & Hannah-Lou and The Lantern Players.12th – 21st February 2010.Following the release of Trevor Moss & Hannah-Lou’s self-titled debut album on Loose Music, the pair will be eschewing the conventional live music circuit in favour of an enchanting tour of village halls, bringing along for company a handpicked selection of the best players from their famous London folk club, The Lantern Society. 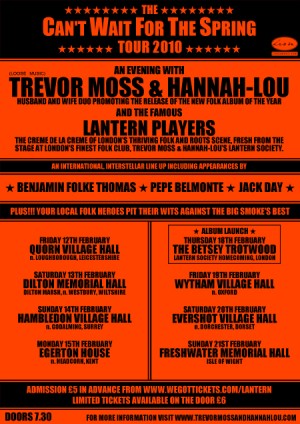 Their back to basics jaunt around the southern counties embraces a more rustic approach, advertising via the local post offices, pubs and village notice boards.‘The village hall, pub, post office and shop are the cornerstones of the community, in fact that’s all there is in our village. Our country is blessed with a plethora of beautiful and too often underused village halls, designed and purpose built for close knit communities to gather in and perform to one another.’Establishing their thriving folk club ‘The Lantern Society’ in 2008 and just completing the maiden year of broadcasting ‘The Lantern Society Radio Hour’ a bimonthly online radio show to great success, Trevor Moss & Hannah-Lou have become pivotal figures on the London folk and roots scene. Proof of this coming when The Camden Crawl, the capital’s biggest music festival headhunted the pair to sit alongside the industry’s elite on the festival committee for 2010.Trevor Moss & Hannah-Lou, keen to involve the local communities, have invited a selection of local acts from in and around each village to join the bill and pit their wits against the Big Smoke’s best.The Lantern Society Radio Hour will be producing and broadcasting a very special ‘Can’t Wait For The Spring Tour’ edition, capturing live the essence of the journey and continuing the modern field recording odyssey that is The Lantern Society Radio Hour.Plans are being made for a northern counties leg of the tour later in the year, followed by Scottish, Welsh and Irish legs.Dates for the ‘Can’t Wait For The Spring Tour 2010’ are as follows:FebruaryFriday 12th - Quorn Village Hall, Leicestershire.Saturday 13th – Dilton Memorial Hall, Wiltshire.Sunday 14th – Hambledon Village Hall, Surrey.Monday 15th – Egerton House, Kent.Thursday 18th – The Betsey Trotwood, London (ALBUM LAUNCH)Friday 19th – Wytham Village Hall, Oxfordshire.Saturday 20th – Evershot Village Hall, Dorset.Sunday 21st – Freshwater Memorial Hall, Isle of Wight.Tickets available in advance from www.wegottickets.com/lantern£5 in advance, Limited tickets available in the door £6