CW Stoneking Takes Over The BBC 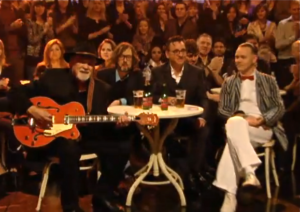 Well, almost. On Friday night he could be heard in session on Mark Lamarr's radio show. It'll be available to listen again on the BBC iPlayer for the next few days HERE.

At the same time he could be both seen and heard on Later With Jools Holland. Head on over to CW's Youtube channel to see him play JUNGLE LULLABY & JUNGLE BLUES.

And if that wasn't enough, you can now get your (virtual) hands on a free download of Jungle Blues - THISAWAY.

Did you catch CW's rather excellent session with Mark Lamarr? No? Must be that you were watching him over on Jools Holland on BBC2 instead. Well you can listen again, for the next seven days, just click on the link below.