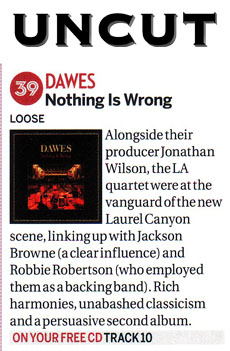 The Dawes and Felice Brothers albums have been doing well in the end of year album charts. Following on from the news that both albums feature in Rough Trade's top 100, Uncut magazine has also acknowledged them in their Top Albums of 2011 lists.Dawes' album Nothing Is Wrong comes in at No.39, with album track My Way Back Home featuring on this month's Uncut CD. The 20 Best Americana Albums chart places The Felice Brothers' Celebration, Florida at No.18, with Dawes making it in the top 10 at No.9.Other notable successes include Dawes's album at No.5 and Felice Brothers at No.30 in the American Songwriter Top 50 and Dawes at No.8 in Paste Magazine. Not bad at all.