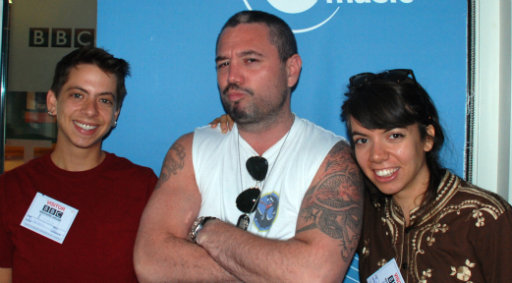 Hurray For The Riff Raff on 6Music

If you missed Hurray For The Riff Raff being interviewed on BBC 6Music, you have a week to listen again HERE on the iPlayer (2hr 27mins in).Huey Morgan chatted to Alynda and Yosi on his 6Music show this afternoon and also played a few tracks off the new album.Huey is a big fan of the band and ended the interview by saying, "They're going to be the next big thing - I can almost guarantee it".If you've seen them play live, you'd know that they certainly should be. HERE's a list of their remaining UK tour dates. Here are some reports from their first couple of gigs:"I marvelled at how someone so young can emanate such world weary wisdom. Goddamn perfect." The Mad Mackerel"They were profoundly humble, authentic and talented. Alynda's singing was faultless and, at times, had us close to tears. Yosi's creative and tasty violin playing was deliciously understated"  Nursey Bang Bang