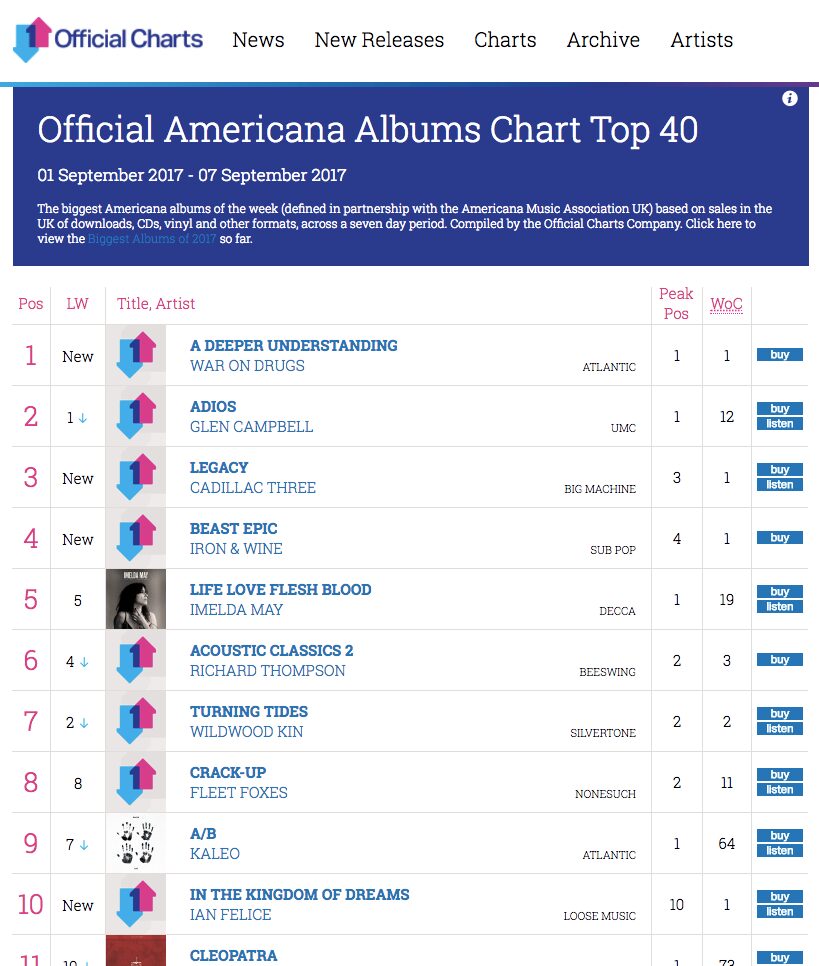 Ian Felice 'In The Kingdom Of Dreams' In The Charts

Rather nice to see Ian Felice's debut solo record 'In The Kingdom Of Dreams' in at #10 in the UK's Official Americana Albums Chart this week, with the re-issue of Courtney Marie Andrews' 2013 album 'On My Page' in at #25. Ian's album is also #14 in the Indie Breakers Chart and #43 in the Independent Albums Chart. Not bad.Here's some of  what people have been saying about the record:-

"Not surprisingly, In The Kingdom of Dreams refuses to play in the background so, long before "Ten to One" and "In The Final Reckoning" reverberate with drama both personal and social, it becomes impossible not to sit down and listen closely to what Ian Felice is saying. That’s why the cover painting of this album, evocative as it is, only barely intimates everything going on in the songs and the musicianship inside it."9/10GLIDE MAGAZINE

"One of the most distinctive voices of our generation, and a peerless lyricist to boot... simply a truly lovely record... The world is certainly a better place with Ian Felice in it. Long may he continue."8/10GOD IS IN THE TV

"It serves as a deeper look into the narrative of The Felice Brothers, showing listeners what Ian Felice as an individual brings to their songwriting board and what he as a human went through to make the Americana authenticity of the band gleam with memories that are realer than he was ever told."B-CONSEQUENCE OF SOUND

"Ian Felice finds a beautiful sweet spot somewhere between Bob Dylan and Jeff Mangum... an excellent collection of songs that holds together remarkably well, full of intrigue and strange imagery - a strong record and one I recommend heartily."8/10AMERICANA UK

"The songs, some of his finest in recent years, are packed with the personal mixed in with all manner of other bizarre and surreal images. Teamed with Simone Felice’s hallucinogenic production and the fluid transitions from one song to the next, what Ian Felice has created is a fair musical adaptation of a long, reminiscent dream. The kind we’ve all had, and that’s the genius of it. It’s personal, but universal, and wrapped up in one healthy package."GIGSOUP

"...idiosyncratic and beguiling. A cult album in the making perhaps..."BLABBER 'N' SMOKE

"Ian Felice offers so much beauty, so much inner thought and deliberate musing, that the melancholy is powerful, all consuming and welcomed with all your heart... a magnificent debut from one of the Felice Brothers"★★★★★LIVERPOOL SOUND AND VISION

"an instant classic" 4/521st Century - Single Of The WeekINDIELONDON

"this stands up as a serious piece of work and important entry into the Felice canon."ROCKING MAGPIE