A great review in today's Independent of the Danny and the Champions of the World album launch.(click to zoom) 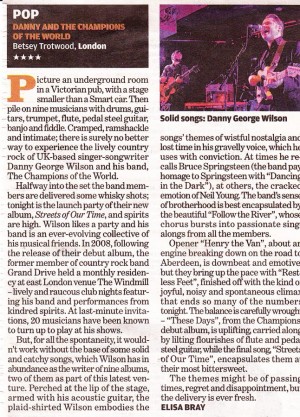 Picture an underground room in a Victorian pub, with a stage smaller than a Smart car. Then pile on nine musicians with drums, guitars, trumpet, flute, pedal steel guitar, banjo and fiddle. Cramped, ramshackle and intimate; there is surely no better way to experience the lively country rock of UK-based singer-songwriter Danny George Wilson and his band, The Champions of the World.Halfway into the set the band members are delivered some whisky shots; tonight is the launch party of their new album, Streets of Our Time, and spirits are high. Wilson likes a party and his band is an ever-evolving collective of his musical friends. In 2008, following the release of their debut album, the former member of country rock band Grand Drive held a monthly residency at east London venue The Windmill – lively and raucous club nights featuring his band and performances from kindred spirits. At last-minute invitations, 20 musicians have been known to turn up to play at his shows.But, for all the spontaneity, it wouldn't work without the base of some solid and catchy songs, which Wilson has in abundance as the writer of nine albums, two of them as part of this latest venture. Perched at the lip of the stage, armed with his acoustic guitar, the plaid-shirted Wilson embodies the songs' themes of wistful nostalgia and lost time in his gravelly voice, which he uses with conviction. At times he recalls Bruce Springsteen (the band pay homage to Springsteen with "Dancing in the Dark"), at others, the cracked emotion of Neil Young. The band's sense of brotherhood is best encapsulated by the beautiful "Follow the River", whose chorus bursts into passionate sing-alongs from all the members.Opener "Henry the Van", about an engine breaking down on the road to Aberdeen, is downbeat and emotive, but they bring up the pace with "Restless Feet", finished off with the kind of joyful, noisy and spontaneous climax that ends so many of the numbers tonight. The balance is carefully wrought – "These Days", from the Champions' debut album, is uplifting, carried along by lilting flourishes of flute and pedal steel guitar, while the final song, "Streets of Our Time", encapsulates them at their most bittersweet.The themes might be of passing times, regret and disappointment, but the delivery is ever fresh.