With his popularisation of a freewheeling, ragtag style inflected with folk, country and gospel, Paolo Nutini has once again made it all right to bash a guitar as if you're some sort of gipsy hybrid of Van Morrison and Ronnie Lane.It would seem fair if he now held the door open for Danny And The Champions Of The World. They are on their second album of that kind of thing but the Champions' leader, Australian-born Danny George Wilson, has more than earned his spurs, having also led South London country-rockers Grand Drive for 12 years.That's how he comes to be writing tender elegies to broken-down tour buses (Henry The Van), but it doesn't explain how the Champions maintain either their unaffected joy in playing together or the freshness of their sound. It's hard to see exactly what will elevate Wilson to greater acclaim after all these years, but music with this much charm can only be a step in the right direction.(click to zoom) 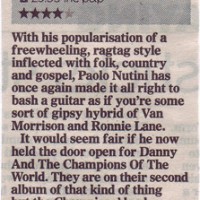