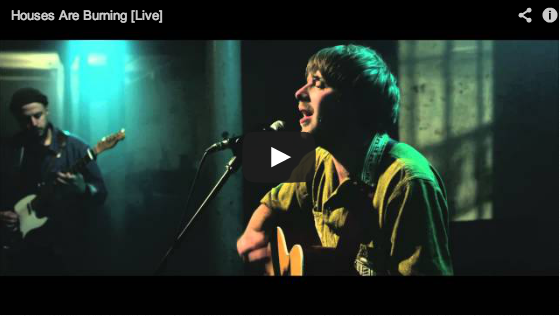 Super huge American news site, USA Today has just premiered the brand new Treetop Flyers video for "Houses Are Burning", a track taken from the band's debut album "The Mountain Moves" (out now in Europe). The video was filmed in a warehouse in Leeds by The Blind Club, a production company that also has done videos for the likes of Jonathan Wilson and Michael Kiwanuka.Houses Are Burning deals with how people related to each other — or, perhaps more accurately, how they don't. "That could be a loved one, it could friends, businesses, anything," says lead singer and songwriter, Reid Morrison. "It's just that kind of relation to people and their problems. If you keep doing it and don't fix it, it's going to keep coming up and up again."The band head over to the US towards the end of the month, to play a couple of shows in New York and LA, ahead of their US release date, before returning to the UK in time for Glastonbury and a list of other festivals, which includes Truck, Larmer Tree, Secret Garden Party, Lounge On Farm and Standon Calling.