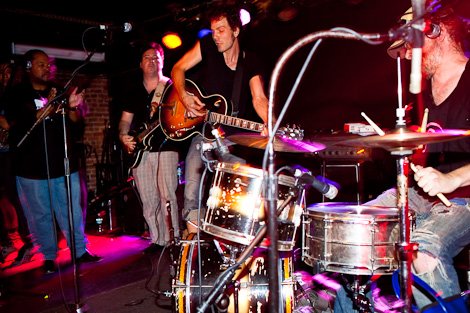 The Duke & The King had their record release show at NYC's Mercury Lounge on Tuesday night for their new album "Nothing Gold Can Stay". The band is centered around the duo of Robert "Chicken" Burke and Simone Felice (of the Felice Brothers) and was filled out with simple instrumentation of violin, bass and a sometimes drummer/singer in a Wu-Tang T-Shirt (The Deacon). Simone and the Chicken traded off leading songs on guitar, harmonizing and playing the drums at an informal pace, feeling out which song would be played next in an intuitive, democratic manner.Simone Felice had the most presence as a leader with a confident, steady voice and the body language of both a bird stretching its wings and a snake coiling up on itself. There was a genuine appreciation among the musicians for each other, Simone and the Deacon hugged a couple times on stage, and when the violinist played a pretty intro Simone remarked, "That was beautiful, play that again!" The music was refreshingly pure; like the people who bring down the organic apples to the Union Square Farmer's Market, it was a reminder that current music can be made by simple means with out all the ego and unnecessary modern distractions.The Duke & The King are now on tour and will be back in NYC to play a show at City Winery on August 25th.