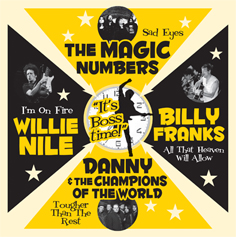 Don't know about everyone else, but the words "limited edition vinyl" rarely fail to get our attention. Particularly when you throw in the names Danny & The Champions Of The World, The Magic Numbers and Bruce Springsteen. However, before we completely mislead you into thinking Danny & co. have been recording with The Boss (working towards that one), let us explain:By way of celebrating this year's Record Store Day, Badlands (good friends and winners of indierecordshop.org's Best UK Independent Record Store 2010) will be releasing a 10" vinyl EP of Bruce Springsteen cover versions, entitled "It's Boss Time!". Here's what it includes: 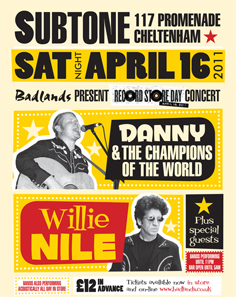 The Magic Numbers - Sad Eyes (from the 1998 box set of previously unreleased material "Tracks") Danny & The Champions Of The World - Tougher Than The Rest (from the 1987 album "Tunnel of Love") Willie Nile - I'm On Fire (from the 1984 album "Born In The USA") Billy Franks - All That Heaven Will Allow (from the 1987 album "Tunnel of Love")The vinyls are limited to 500 copies worldwide, with the tracks recorded by The Magic Numbers, Danny & The Champions Of The World and Billy Franks recorded especially for the EP, so unavailable anywhere else. A portion of proceeds from Badlands retail sales will be donated to Light of Day. We'll be bringing you the pre-order links very soon, so keep checking back.As well as putting out the vinyl EP, Badlands are promoting a concert in Cheltenham on the evening of 16 April, featuring Danny & The Champions Of The World and Willie Nile, along with other special guests.Tickets are £12.00 in advance, available instore or online from  www.badlands.co.uk. Bands are onstage from 7pm at Subtone, with live acts also performing in the shop throughout the day.