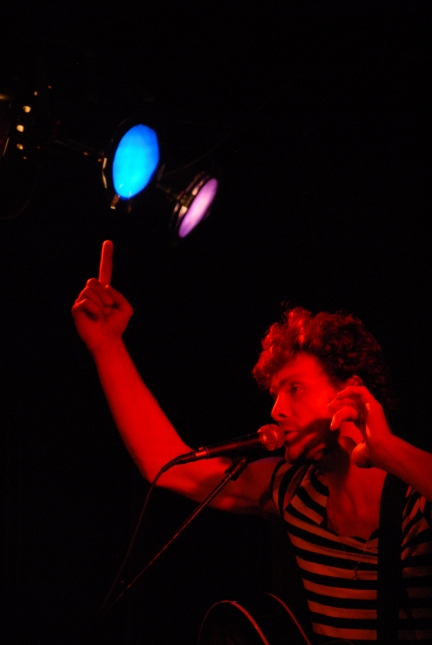 The Duke and the King @ The Basement, Nashville, Tenn

Before launching into "Union Street" at The Basement Monday night, Simone Felice of the Duke and the King said the song recalled a time when Genesis and Cyndi Lauper ruled his headphones.The tune, which is off the band’s new album Nothing Gold Can Stay, revisits the singer’s first romance with rock ‘n’ roll –and everything that goes with it. On the streets of Brooklyn, the young Felice craves MTV, pops pills and perhaps gets fresh with a friend’s drug-addicted mom. Ah, sweet bird of youth.The Duke and the King is the new project of Simone Felice, formerly of the Felice Brothers, and Robert "Chicken" Burke (George Clinton, Sweet Honey in the Rock). The band’s debut album, released Aug. 4 on Loose Music/Ramseur Records, has garnered critical reviews here (USA) and abroad.(Click to zoom)

Themes of loss and transience permeate the record. (In an open letter to fans, Felice said the songs were inspired by the loss of his baby girl, penned during the winter of his discontent, in the wilds of upstate New York). But where the Felice Brothers recall a dusty jug band from the old, weird America, the Duke and the King are mellow and introspective, moving to the R&B grooves of the man they call "Chicken."Live, the band amps it up a notch. Monday’s show featured the drumming of Nowell "The Deacon" Haskins, an ex-preacher from New Jersey with a heap of Northern soul, and a Wu-Tang shirt to boot. Electric violin rounded out the lineup.On stage, the Duke and the King exude an easy, loose vibe that lightens the often dark subject matter. All told, it’s a show not to be missed.– Caine O’Rear (www.americansongwriter.com)- Photographs by Avalon Peacock