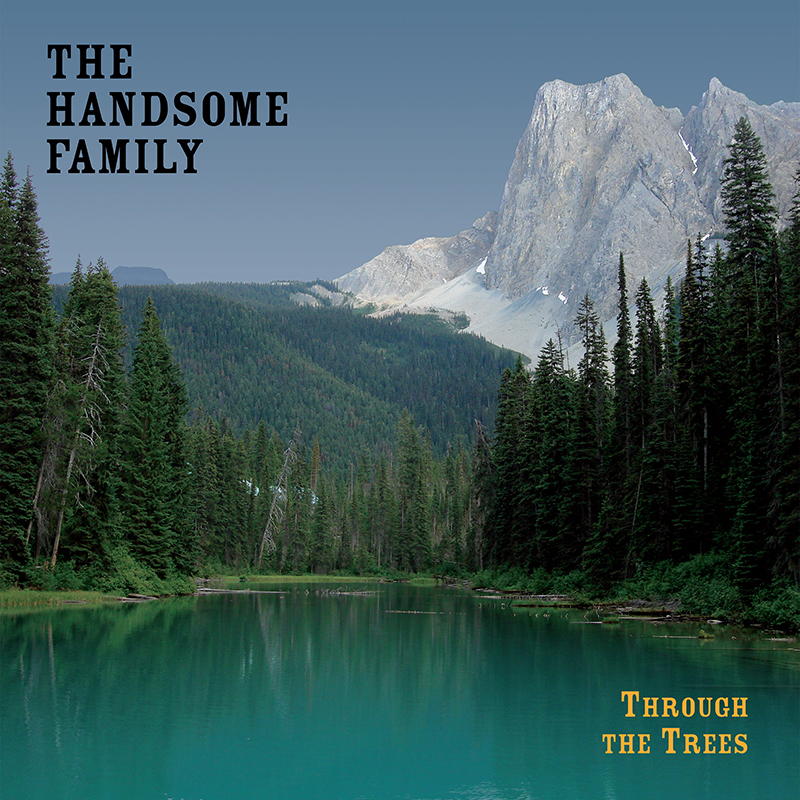 2018 marks 20 years since the release of The Handsome Family's third album, Through The Trees. We're celebrating this with a 20th Anniversary Edition of the album, pressed on "Albuquerque Sky Blue"-coloured heavyweight vinyl. It comes with an exclusive "Invisible Trees" bonus CD, comprising of 15 tracks of "out-takes, live performances and bickering", Rennie's story on the recording of the album and liner notes from Andrew Bird. Pick up a copy from the Loose shop, here, or from the band as the make their way around Europe, performing all the tracks from Through The Trees. Find dates and ticket links here.

"Bewitching in its weirdness, Through The Trees and its bonus CD of demos, live performances "and bickering" is almost comically unsettling, a unique fermentation of gothic country. Seven albums later the quality has rarely dipped, but this is where the magic first revealed itself."★★★★MOJO

"a defining work by Brett and Rennie Sparks and an inescapably intense listening experience that excels in mood and storytelling. A tentpole release for the developing Americana scene back in the day… one of Americana's more eclectic records. To their credit, they moved the genre forward, paving the way for greater eccentricity and experimentation."THE LINE OF BEST FIT

In 2015 The Handsome Family became famous for providing the theme tune to Season 1 of HBO’s hit TV drama series True Detective, introducing them to a whole new audience and a whole load of new fans. The featured song, Far From Any Road, has been streamed over 50 million times and counting. The Handsome Family suddenly became a little less of a secret. However, even before this worldwide success, the band weren’t short of admirers, counting Bruce Springsteen and Ringo Starr amongst their fans, and with the likes of Jeff Tweedy, Amanda Palmer, Cerys Matthews, Christy Moore and Andrew Bird all having covered their songs. In 2016, the band released Unseen. The highly anticipated new record explored the unseen stories, people and places of the American west. It was greeted with rave reviews from the international press with Mojo declaring the album to be "The Handsome Family’s masterpiece".

However, it was way back in 1998 when Brett & Rennie Sparks got their first big break, with the release of the The Handsome Family’s third album, Through The Trees. Rennie recalls the recording process: "We wrote and recorded all the songs for Through the Trees in a third floor walk-up loft in the heart of Chicago. This was the actual forest of Through the Trees— an old warehouse space with high, crumbling ceilings, huge chains hanging from cracked sky-lights, fat black cockroaches wobbling across the uneven floor, a broken elevator, a DJ booth (where we slept) and eight foot high windows preparing to fall out onto the street. Light bulbs exploded when turned on and frost formed in the living room. We named one of the many large paint chips hanging from the tin ceiling (Chippy). Outside was a garbage-strewn, urine-stinking street that was a constant parade of wind-beaten people.

Walking home from a bar one night I saw a rat scuttle behind a dumpster and felt a surge of joy. I began to notice pigeons cooing in girders below the highway and the way leaves fluttered in the scrawny branches of sidewalk trees. Living in a man-made wilderness made me begin to see nature. It made me begin to write about falling snow, barking dogs, snakes, forests, mountains, fire... So began the songs of Through the Trees.When Brett recorded a take in that make-shift loft studio I had to stand perfectly still so the floor wouldn’t squeak. We still managed  to make so much noise that our downstairs neighbor often turned his stereo on full blast, pointed the speakers up at the ceiling then left for the day. We deserved it. We were two crazy kids. Literally.

Dave Trumfio, who had produced The Handsome Family’s first two albums, encouraged Brett to make the record on his own. In those days making a record outside a studio was fairly unheard of, but Brett was determined to learn. We couldn’t afford to buy recording equipment, but we found a rental company in the suburbs. We did own a drum machine. Our drummer, Mike Werner, had called it quits a few months back and Dr. Rhythm (Boss DR-770) had taken his place. The rental equipment wasn’t easy to work with or of high quality, but it was a start.

During this time, our favorite venue was Chicago’s legendary Lounge Ax. The owner of the club, Sue Miller, had just married Jeff Tweedy. Brett had given Jeff a cassette with some demos on it. Jeff offered to let us borrow a bunch of gear he had but wasn’t using (an ADAT, a Mackie mixer, Lexicon reverb and a fabulous Tube-Tech compressor). This was a huge gift - Jeff gave us more than gear, he gave us time. We returned our rental equipment and slowed our work pace. We were finally recording music without worrying about how much money each hour was costing us. It completely changed how we worked.As Brett finished recording the basic tracks, Dave offered to help mix the songs at his apartment. He had an actual computer at home with something called Pro Tools. It was the first time we’d ever seen waveforms turned into computer files on a screen. Revolutionary.

Dave didn’t just help mix our tracks he also added some great sounds (like the circus drum on, "Weightless Again"). Jeff also offered to add some overdubs to our tracks. I am still in awe at the generosity of both these talented guys. I remember Jeff taking his guitar and Univibe into Dave’s tiny bathroom to record guitar for "Where the Birch Trees Lean." I remember Jeff clearing his throat to sing backing vocals on "Cathedrals" while we sat on Dave’s sagging couch staring up at him. Brett found some noises on a sound effects CD to add to "My Sister’s Tiny Hands" (a squawking parrot) and "The Bottomless Hole" (a creaking door). We recorded our own stamping feet on the loft floor (torturing our downstairs neighbor again) for "Down in the Ground." Brett remembers Dave playing the in-the-pocket bass on "Stalled" and arranging the horn section on "My Ghost."

In the UK a new label, Loose Music heard our song "Moving Furniture Around" on a compilation released by Chicago’s Bloodshot Records and now were interested in licensing Through the Trees. It was Loose’s first full length release. Twenty years later, we’re both still going strong. Miraculous!"

Following its release, Uncut magazine declared Through The Trees to be the year’s "Best New Country Album", Mojo magazine named it one of the "10 Essential Americana Records Of All Time", with The Guardian going on to call the album’s opening track, Weightless Again, one of the "100 Best Songs Ever Written About Heartbreak".

"Through the Trees was written at a time when being a full-time musician seemed an unattainable dream, but it is the record that made that dream come true," says Rennie. "The songs bring me back to real moments in our lives: "Cathedrals" is about a winter trip we took to the Wisconsin Dells because all the hotels were half-price. "Down in the Ground" is about my childhood fear of basements. "I Fell" is about a horse’s jaw bone I found in the dirt outside Albuquerque. Robert Wadlow, "The Giant of Illinois," came to me via a travel guide to Illinois. There is no mountain north of Winnipeg, but I never imagined I’d ever go to Canada or that there would be an internet where people could look at maps in an instant. "Weightless Again" started as a stupid joke: Brett is a child of the desert who never learned to float. "The Woman Downstairs" actually got fat not thin, but, yeah, that was one awful apartment building. "My Ghost" is perhaps the most misunderstood song on Through the Trees because the words are my imagining of Brett’s experience. I’m glad they ring true to bi-polars even if they are the work of a depressive. I am still a person of dark moods, but I haven’t jumped off the Golden Gate Bridge. I remain deeply thankful and sustained by all who have helped us live the lives we dreamed up for ourselves so many years ago."