Here it is folks, Treetop Flyers' debut album 'The Mountain Moves' is finally here, available now in all your favourite formats - DL, CD, LP. Let us use this space to remind you of a few of the nice things that people have been saying about it so far :- 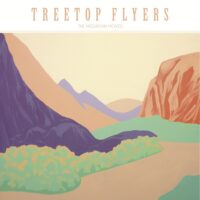 "…effortlessly captures the spirit of late-1960s west coast pop-rock: the Byrds and Crosby, Stills, Nash & Young. British influences can be heard: there are hints of the Faces' or the Rolling Stones' swagger in Laurie Sherman's classic-rock guitar licks, and sublime opener Things Will Change dips into 1980s winsome indie" ★★★★ - The Guardian

"Debut album 'The Mountain Moves' is chock full of lush harmonies, warm arrangements and billowing acoustic guitars as fresh as a breeze looming in from San Francisco harbour" - 8/10 Clash

"From start to finish this album is a masterpiece. It is like a well-oiled machine, it works perfectly and flows effortlessly" - Music News

"An album that oozes quality, demands repeated listens, and almost certainly signals the emergence of a major new talent" ★★★★★ - Get Ready To Rock

"marks a somewhat welcome return to the classic side of folk-rock."  7/10 - This Is Fake DIY

"This is a really strong debut that in channelling the greats becomes great in its own way too." ★★★★ - IndieLondon