Will Hodgkinson- With its high ceiling and granite walls, the village hall in Quorn, Leicestershire is an ideal location for amateur dramatics, yoga classes and, as an elderly Quorn resident called Jean tells me, "circle dances that get rather lively". It's also the venue for the first leg of a cutting-edge live music tour made up entirely of village halls."You can't miss it," says Trevor of husband-and-wife singing duo Trevor Moss and Hannah-Lou, who are headlining the tour. "I'll be outside, putting the finishing touches to a sandwich board." I do manage to miss it, chiefly because Moss is not working on the board announcing the concert. He's inside, putting up the bunting. 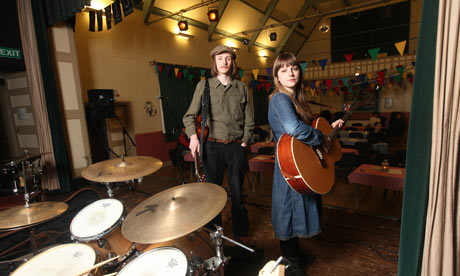 Village halls do not tend to be the first venues up-and-coming bands choose to showcase their talents. But then, having brushed against the conventional music industry and found it wanting, Trevor Moss and Hannah-Lou are building up a career entirely outside of the existing ­system. In 2007 their old band Indigo Moss became a hot prospect for its then-original blend of British indie and American bluegrass. They went through the usual route of getting signed to a label, doing support tours, and performing at showcases. Then, just as interest was building around them, they split up."We discovered that being in a hip band wasn't as much fun as we thought," says Moss, when he manages to find some time between nailing the last string of bunting and setting up the bar on a trestle table. "We would be doing press nights at