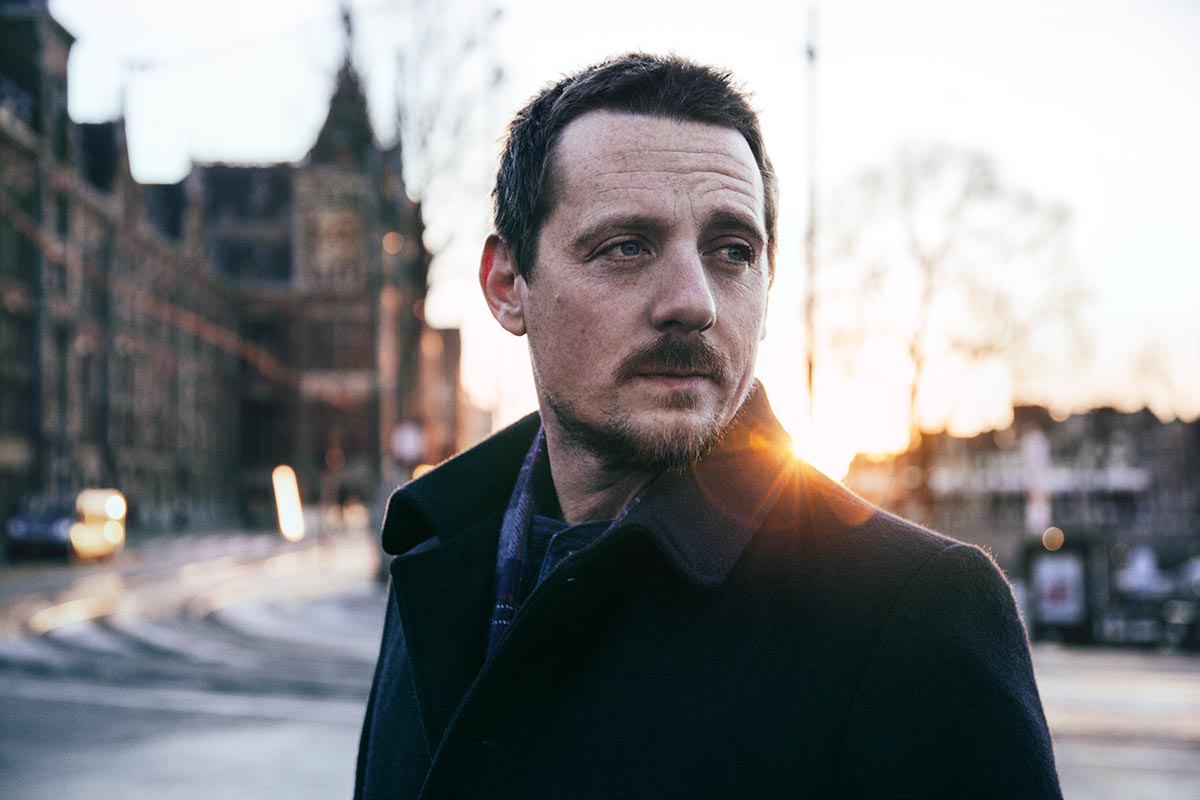 Sturgill Simpson isn’t one to rest on his laurels, which is why, less than a year after the release of his critically acclaimed debut, High Top Mountain, the singer-songwriter is coming out with his captivating and wholly unique sophomore album, Metamodern Sounds in Country Music, on 12 May, through Loose Music.

The album title – an allusion to Ray Charles’ ground-breaking 1962 record, Modern Sounds in Country and Western Music -- hints at the psychedelic sounds found within, a departure from Simpson’s first album, which drew comparisons to the music of Waylon Jennings and Merle Haggard. “I think that there is a lot of room in country music for progression and sonic oscillation, which is what I wanted to explore.”

Where some artists find inspiration from other music, Simpson found his in books, devouring religious texts both ancient and modern, recent studies about discoveries in quantum physics and string theory, and publications by Carl Sagan and Terence McKenna. He also drew upon French filmmaker Gaspar Noe’s experimental drama Enter the Void as he created murky, multi-textured soundscapes that incorporate elements of classic country, bluegrass, rock, and even a bit of electronica, a genre that Simpson admits he has a “slight fetish” for.

Simpson reunited with High Top Mountain producer Dave Cobb (Jason Isbell, Lindi Ortega, Jamey Johnson) for Metamodern Sounds in Country Music; the pair has formed a strong friendship in addition to a solid in-studio partnership built on complete trust and the willingness to engage in creative musical experimentation. Working with a budget of only $4,000, Simpson and his road band – bassist Kevin Black, guitarist Laur Joamets, and drummer Miles Miller -- cut the entire record live to tape in four rare consecutive days off in the middle of a relentless tour schedule; nearly all of the songs were completed in two takes or fewer during these spur of the moment sessions. The result is an album that crackles with the raw energy of a concert.

Opening track “Turtles All the Way Down” was written after Simpson read Dr. Rick Strassman’s The Spirit Molecule, a book about the mystical encounters people have experienced under the influence of the hallucinogenic compound DMT. With this song, Simpson found the theme that would bind this unofficial concept record together: “Every time I take a look inside that old and fabled book/I’m blinded and reminded of the pain caused by some old man in the sky/Marijuana, LSD, psilocybin, DMT, they all changed the way I see/But love’s the only thing that’s ever saved my life.”

“Life of Sin,” bolstered by twangy Telecaster, is reminiscent of a lost ‘70s outlaw country classic, and “Living the Dream” is its rebellious twin as Simpson spits, “I don’t have to do a goddamn thing except sit around and wait to die.”

The spiritual “A Little Light Within,” originally written for a companion soundtrack to AMC’s hit show The Walking Dead, instead found a home among Metamodern Sounds as well. A rafter-rattling, handclapping gospel call and response singalong that channels classic recordings made by the Stanley and Louvin Brothers, it’s uplifting even without the imminent threat of a zombie apocalypse. The musical experimentation and genre blending continue as the band dabbles in a bit of “analog dub step” on the seven-minute epic “It Ain’t All Flowers” before closing with the sparse, acoustic ballad “Pan Bowl”, a deeply personal reflection on his childhood in Kentucky as the son of a coal miner’s daughter.

Rounding out the ten-song track listing are two fascinating choices in cover songs from opposite ends of the musical spectrum: Charlie Moore and Bill Napier’s bluegrass trucker tune “Long White Line,” a song that makes the album’s figurative journey a literal one as it chugs along with the rhythm of the road, and When in Rome’s 1988 single “The Promise,” which Simpson transforms from a New Wave dance hit to a tender country ballad. “There were a lot of great compositions from that era that got lost in production,” Simpson says about his somewhat unusual choice in cover material. “I’ve always thought that the lyrics to ‘The Promise’ were really beautiful; the way we play the song now, a lot of people don’t even recognise it.”

Immediately recognisable, however, is Simpson’s portrait on the album cover, which was designed by friend and painter Jason Seiler, who is perhaps best known for illustrating Pope Francis for TIME Magazine’s 2013 Person of the Year issue in addition to contributing art to publications such as The New York Times, Rolling Stone, and The Wall Street Journal.

Even with its numerous musical and literary influences, Metamodern Sounds in Country Music is, in its soul, a love record. As Simpson states, “Myriad worldly offerings – religion, drugs, and more -- all claim to be the omnipotent universal truth, but in my experience, love is the only certainty. That’s what this record is about.” With a new album and a child on the way, the 35-year old singer-songwriter, who describes himself as anxious to embrace change, is about to experience a lot of it. Critics may have dubbed Sturgill Simpson the saviour of traditional country music, but that’s not a title he’s willing to embrace. Shrugging, he says, “I’m just trying to save myself.” 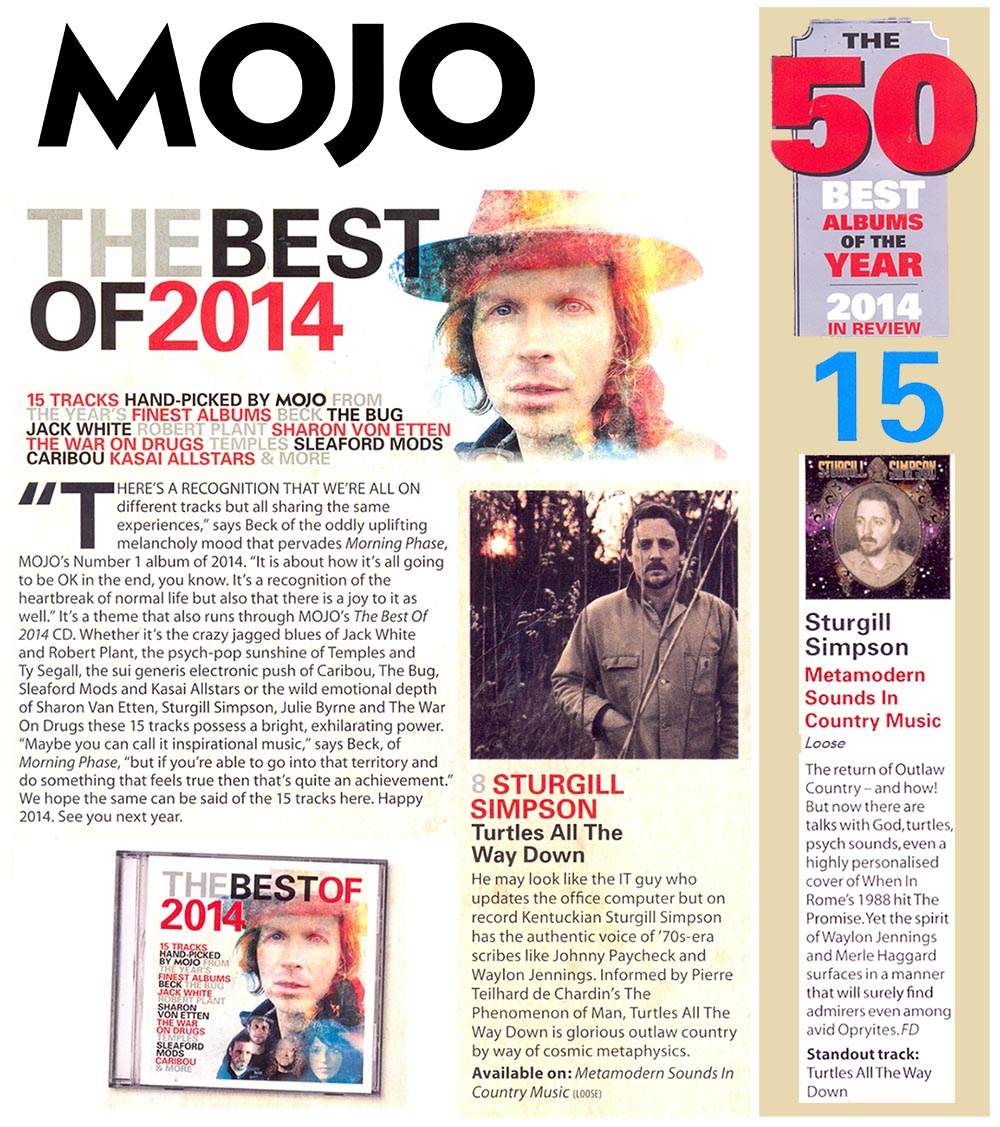 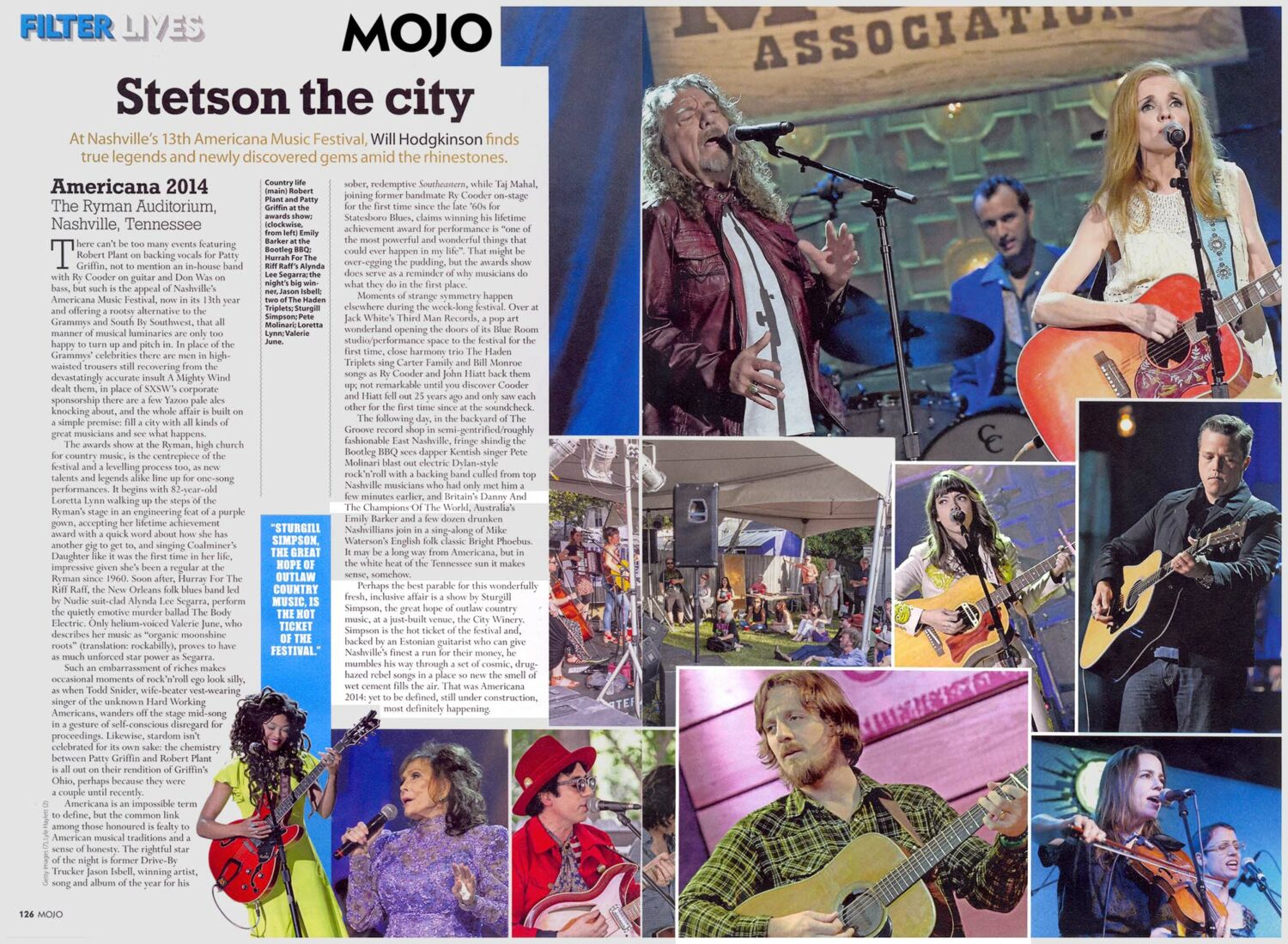 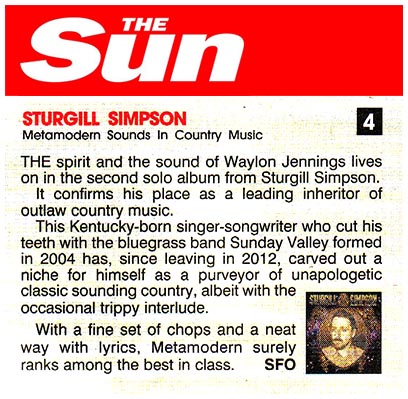 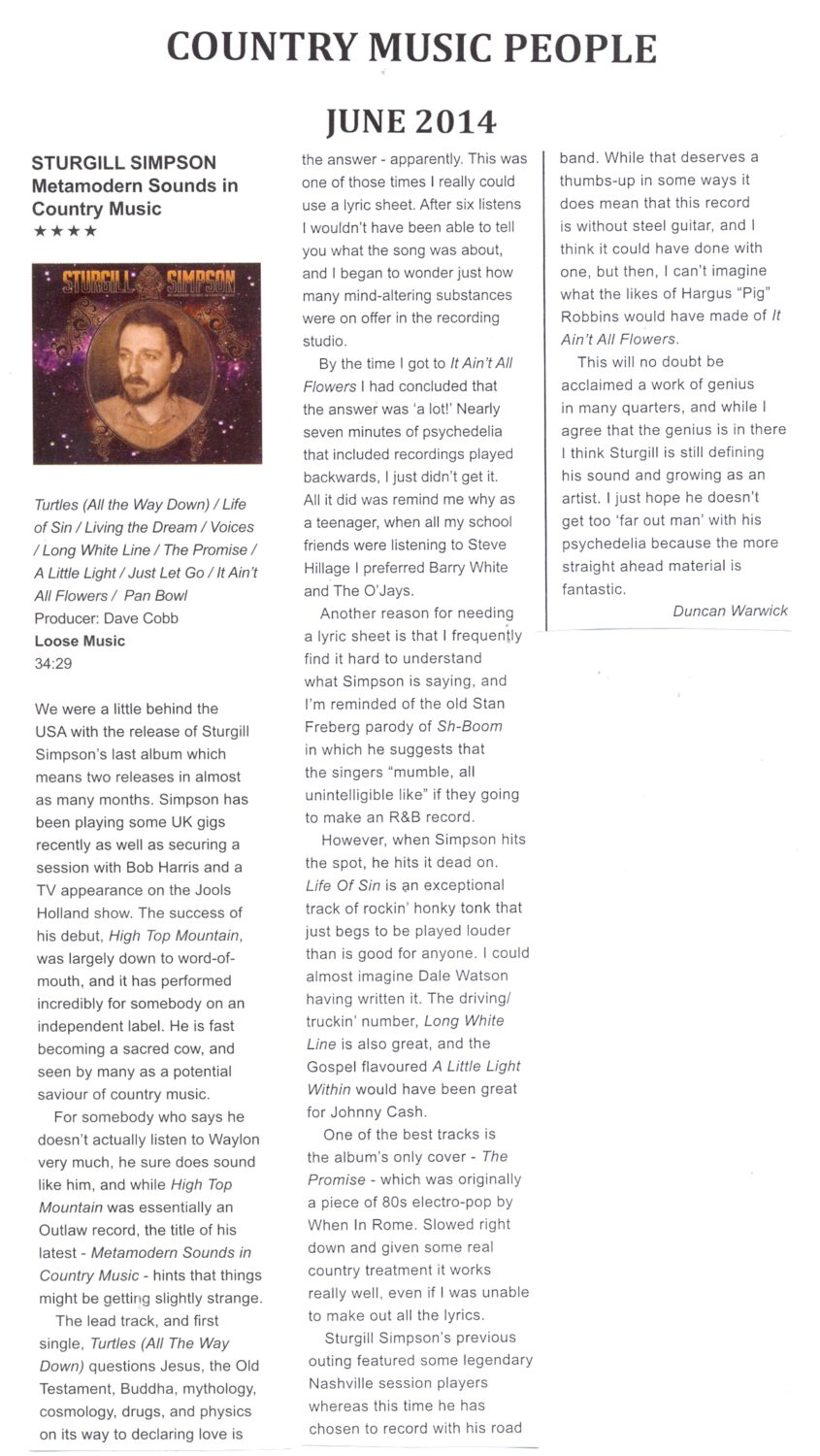 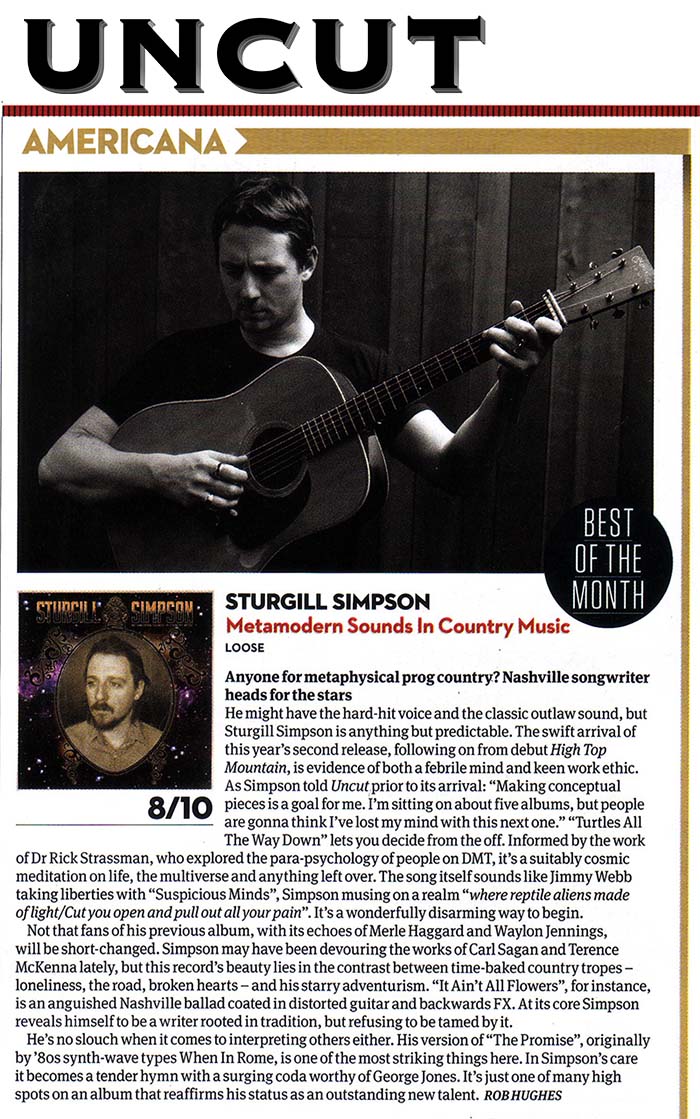 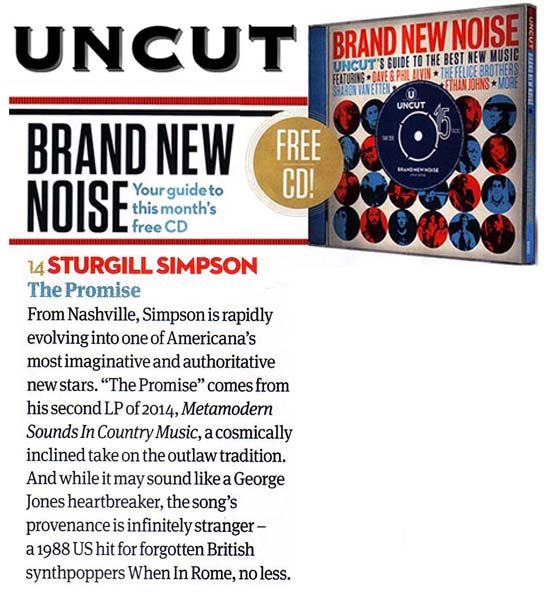 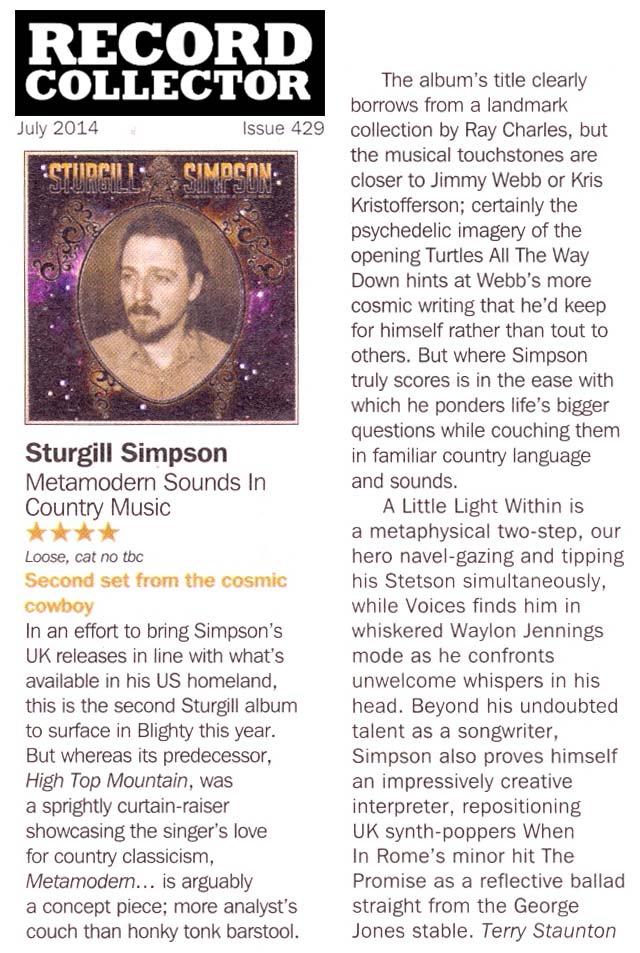 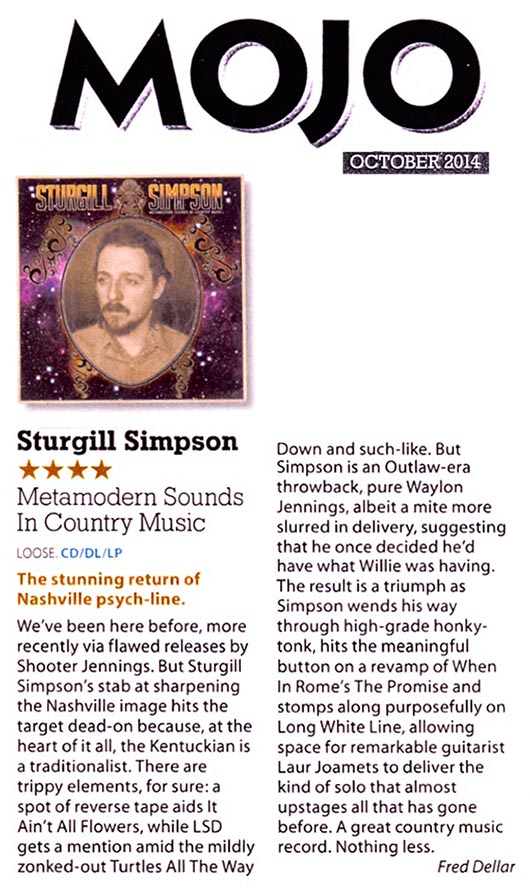 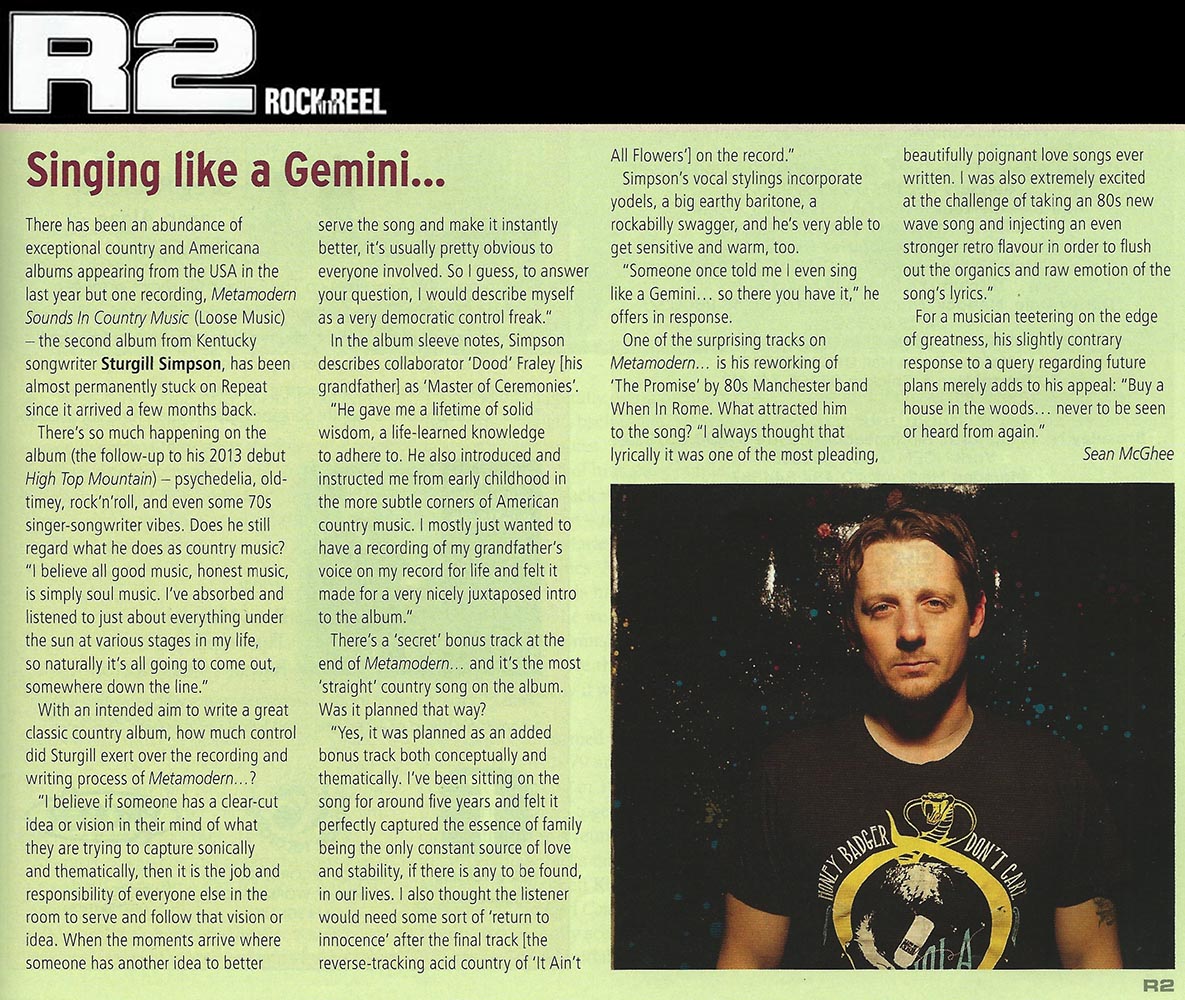 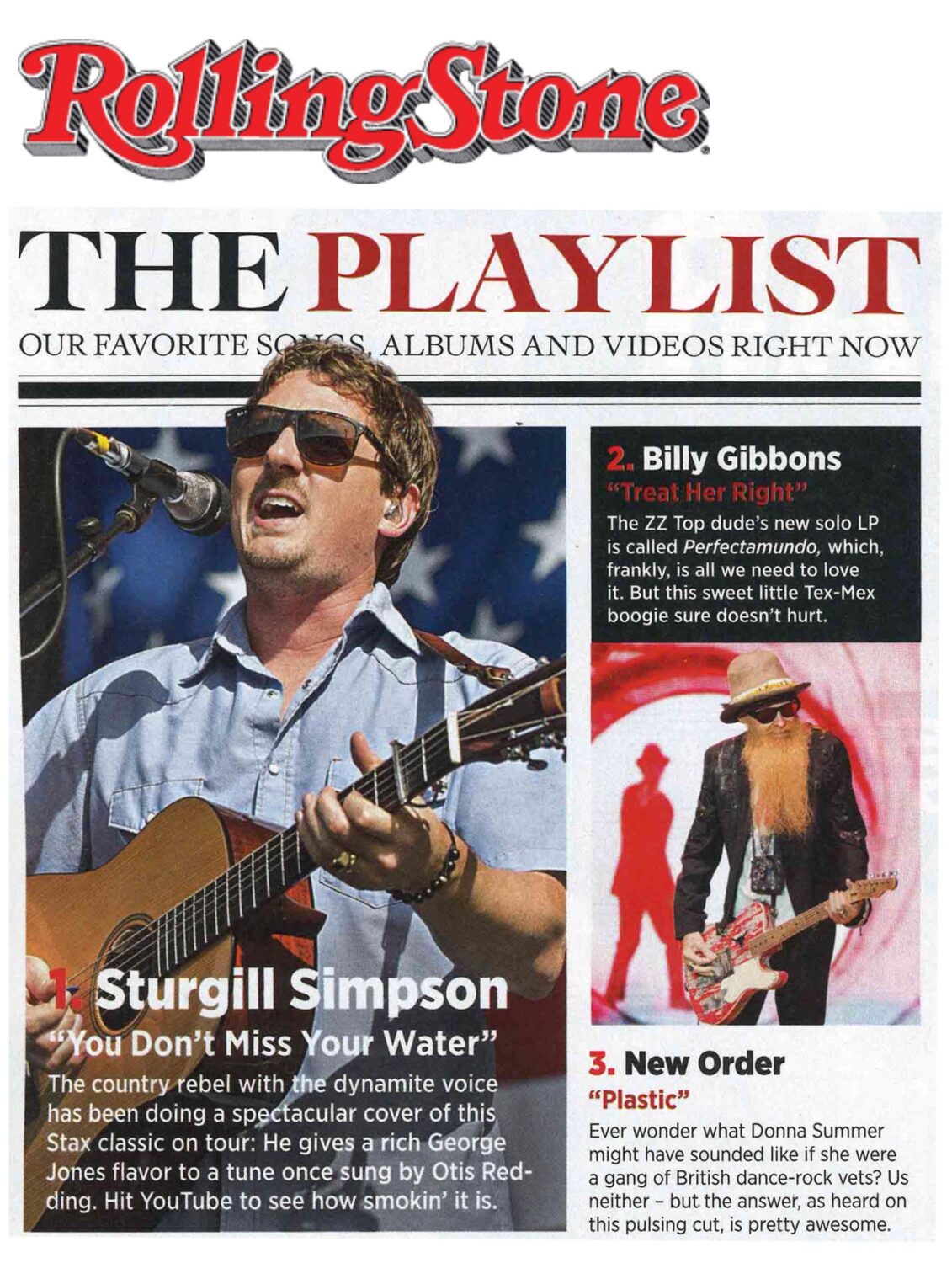 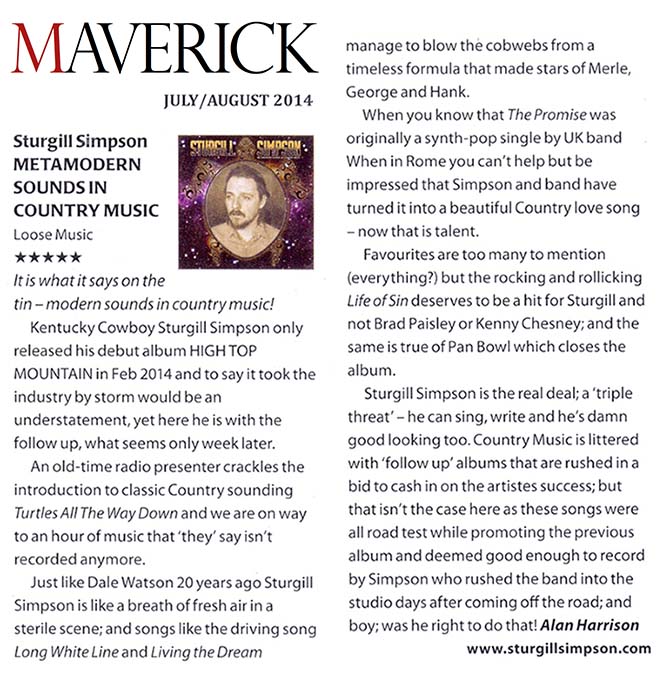 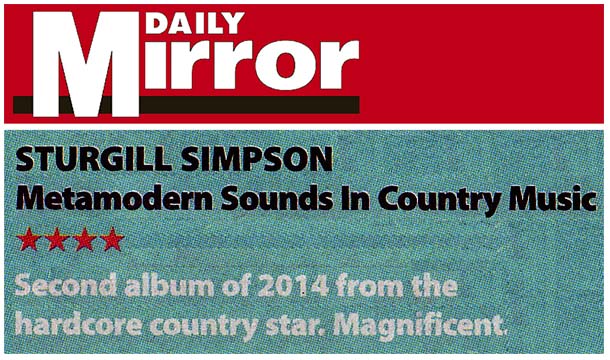 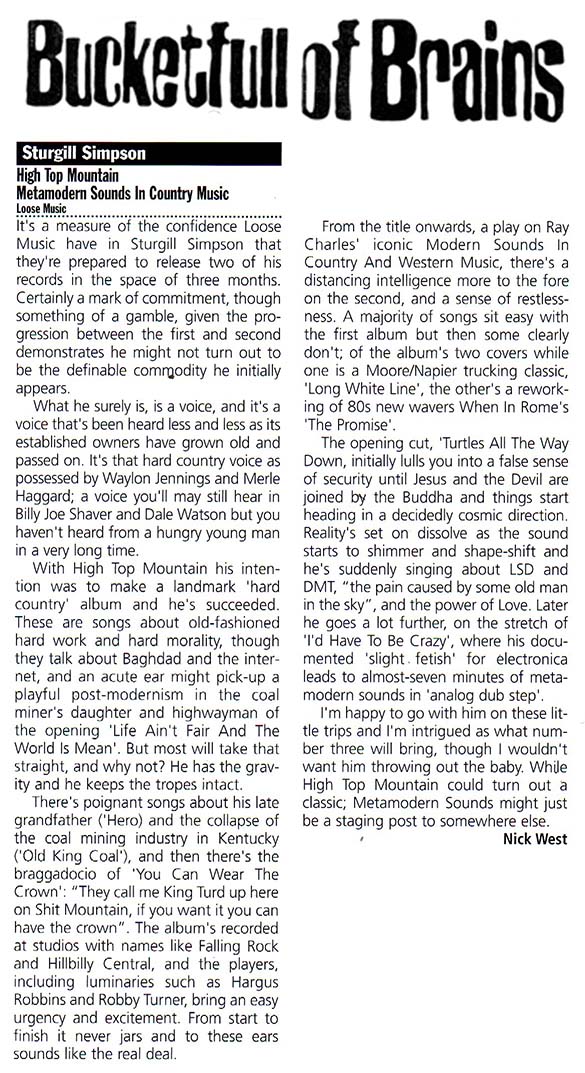 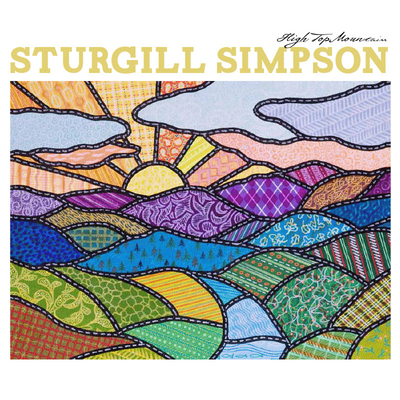 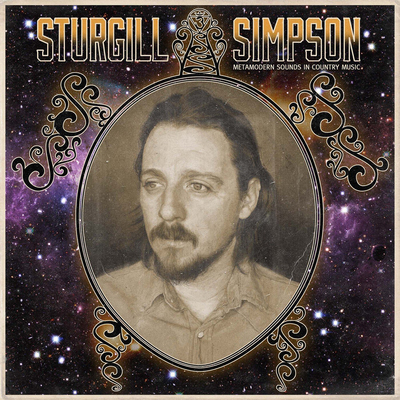